Since 1983, Varmint Gone has offered wildlife removal & damage repair services to homes all across North Carolina. It is safe to say that they have seen it all when it comes to unwanted animals in homes. However, in 36 years of business, Varmint Gone has not ever seen a flying squirrel epidemic as severe as the one that South Charlotte is now experiencing. Twenty years ago, seeing flying squirrels in the area was almost non-existent. Now, our technicians see them in almost every home they inspect. The population number has also begun to rise in Mooresville and other surrounding areas. 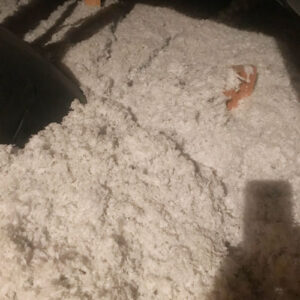 It is imperative to discuss why having flying squirrels in one’s home is not only detrimental to the house but to the family who lives there. To begin, the Eastern & Northern flying squirrels each have babies twice a year, once in the spring and once in the fall. Attics are a favorite place for squirrels to build their nests due to the warm temperatures and the protection it gives from predators. Flying squirrel colonies can grow in size of up to 200 squirrels, after each mating season. These squirrels make their way into a home and attic by chewing holes from the outside, in. They can bite their way through eaves, soffits, gutters, trim, construction gaps and any other weak area that is ½” in size or bigger. Also, each squirrel has its own bathroom area, which leads to an extensive amount of feces contamination throughout an attic. This defecation in the insulation can cause severe odors and potential health effects on a family.

Unfortunately, we are finding it quite common for pest control companies with unskilled technicians that are not familiar with flying squirrels to misdiagnose the issue as mice in the attic of charlotte homes. It is very important to properly identify the feces that is present in your attic. Mice feces are small  elongated dropping, while flying squirrels are round and short in shape. The other important sign is the presents of trails through your attic insulation as seen in the image above. There will also be quarter sized holes located in the insulation as shown in the image featured below. You may have mice feeding on the food brought into the attic by the flying squirrels. However, only treating your attic for mice will only allow the flying squirrel population to flourish and not resolve your issue. It is very important to hire a company that is able to properly identify your issue so it may be resolved before it gets worse. 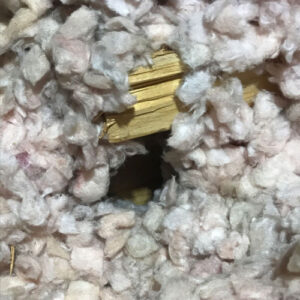 Additionally, it is also important to note that some homeowner’s insurance companies do not pay for squirrel-related damage, meaning that the amount one would have to pay out of pocket is tremendous. Three of the most costly issues that arise when one has squirrels in their home is insulation damage, wire/electrical damage and chew holes. Replacing damaged insulation is expensive in itself, but it can also increase heating and cooling costs within a home. Also, having wire damage can lead to potential house fires. Squirrels are to blame for almost 30,000 house fires, each year! Lastly, the holes that are created by these pests, can lead to severe water damage, among many other issues. All of these added up can lead to one having to pay thousands of dollars out of pocket.

What Should Your Next Step Be?

Ensuring that your family and home are safe is Varmint Gone’s #1 priority! With over 30 years of experience, trust our team to diagnose and resolve your flying squirrel problem. After each project is complete and the home or business is secure from all squirrels, Varmint Gone also provides an unprecedented five-year warranty on all repairs and construction exclusion work. Schedule an inspection with our specialists, today!

About the Author: Varmint Gone

Varmint Gone began offering wildlife removal services and wildlife damage repair in 1984. Over the years, we developed unique and permanent techniques to safely eliminate and remove squirrels, bats and snakes.