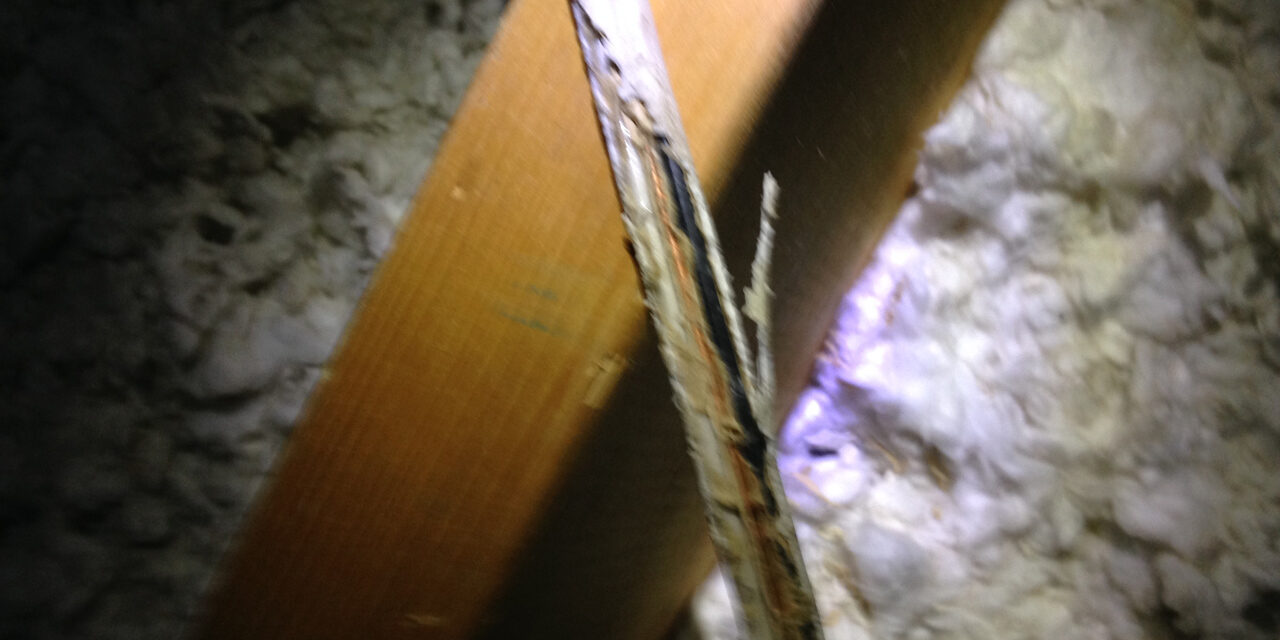 A couple from Fort Mill, South Carolina; contacted Varmint Gone Matthews about a squirrel they found in their attic. The wife was quite upset out this revelation. Subsequently, a time was set with the customer for the next day for a technicians to inspect their home.

The inspection began by reviewing the exterior roofline and the interior attic space of the home. We saw a squirrel climb the exterior of their home and run into a large hole that lead directly into the attic. It was easy to identify the main issue from this point. Upon entering an attic, the first issue we search for during our inspections is electrical wire damage. We found some squirrel electrical damage just on the other side of the large hole, next to a nest. Squirrels like to chew on wires to wear their teeth down, similar to a beaver. They will also use the outer plastic the the wires to make their nest soft. However, this is a serious issue because squirrels are to blame for nearly 30,000 house fires, each year! Squirrel damage electrical repair is critical to ensure the safety of your family and your investment!

How We Resolve Squirrel Electrical Damage

After explaining to the customer that squirrel electrical damage was found in their attic, a time was set to start the squirrel exclusion work the next day. Upon arriving, we began to seal the exterior roofline to prevent the squirrels from entering the home. Next, a one-way door was set at the location of the large hole to allow any squirrels to leave. After a the weekend, we returned to complete the project. We began our extensive cleanup process. First, we remove any nesting material, squirrel feces and contaminated insulation. Second, we sanitize all squirrel “bathroom” areas. Third, we re-fluff insulation to restore its R factor to your attic. On this project, the last step was to make all electrical repairs to building code requirements.

After we finalized the squirrel exclusion project for the customer, they explained that they never knew squirrels had chewed on the electrical wires of their home. Moreover, they expressed how very happy they were that they called Varmint Gone and were very please with the complete project. In addition, they said we did exactly what we promised. More importantly, we have another happy customer and a successful squirrel electrical damage repair in Fort Mill, South Carolina!

Time is of the essence to prevent the start of an electrical fire caused by bare wires touching the dry wood of the exposed rafters. In other words, call Varmint Gone today if you believe you may have squirrel electrical damage in your home.Varmint Gone has provided our customers fast and reliable wildlife removal and damage repair services since 1983. Protect your family and your investment by calling Varmint Gone at 888-391-3330 or schedule an inspection online today!